When the Catalogue for Philanthropy's Generosity Index came out last November, it first metastasized across conservative blogdom as evidence of the generosity of conservatives and the stinginess of liberals when their own money is on the line. After some examination, there have been several effective counterpunches landed to the methodology of the Generosity Index. It is this that led me to create my own Charity Index, which I admit freely has some of its own flaws. But the question remains whether there are stratifications in charitable giving among the states. Despite efforts to explain away the "generosity gap" of certain states, the short answer is, "Yes."

This is the thing. Regardless of why charitable contributions differ across the country--pick 'em: taxes, cost of living, demographics, etc.--it is a question of culture. Tax rates are derived from a cultural question, as is how much a house costs, or who lives next to me. There are also some who want to diminish the idea of charitable giving if it is primarily donated to religious organizations. However, the Acton Institute has noted that at least $3.4 billion a year is given in foreign aid by religious groups, or more than 30% the amount given by the US government. That's just foreign aid. The scope and the effectiveness of the works done by faith-based organizations to assist the disadvantaged in this country are well known, beyond what they have to spend on utilities and building maintenance. There is a clear-eyed reality that needs to be faced about the nature of giving in the US before related questions of national policy can be addressed, particularly when it reveals fundamentally different beliefs and methods for addressing social problems. This is a first step on that path.

Based on the 2004 Charity Index, comparing states by how they went in the 2004 presidential election shows that Bush's "red" states on average are more generous in charitable giving than Kerry's "blue" states: 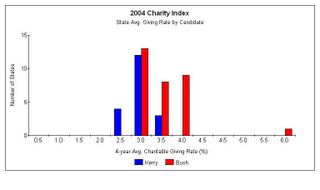 Now, I for one do not find the whole red/blue state thing very interesting; rather it is too simplistic. Commonwealth magazine has some extended analyses on The 10 Regions of US Politics that are more revealing, with classifications inspired by The Nine Nations of North America. I have similarly separated the US into 7 regions of interest. They were created keeping both these models in mind while trying to reasonably balance electoral votes. In fact, I have lifted some of the region names, although I do tweak their compositions.


While the Dixie and Yankee regions support the red state/blue state model for generosity, it breaks down for Pacifica and Frontier country, despite their monochromatic natures. The Field & Stream and Foundry regions are clearly a mixed bag, and even Appalachia, with its bias toward the red, has the odd ball of West Virginia. One of the things this means, of course, is that there are elements of American culture that are far more nuanced than can be reduced to binomial categories along political lines. And thank goodness for that.