The Man Who Saved the Debt Ceiling Deal 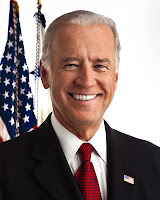 There's a lot of buzz this morning about the vice president's role in the Congress and the White House reaching an agreement to raise the debt ceiling.
This should give us pause that the deal is little more than Washington business as usual, and is, perhaps, even a better indicator than both the Republicans claiming a victory for debt reduction through spending cuts for a plan that slows the rate of borrowing by only about 10% (if we're lucky) and the president insisting that "revenue increases" are still on the table, or the formation of another committee to make the choices the Congress won't make.

Lest we forget, this is what The Pivotal Man said about the budget and spending just two years ago:


People look at me and say, 'What are you talking about, Joe? You're telling me we've got to go spend money to keep from going bankrupt?' The answer is, 'Yes, I'm telling ya.'
- Vice President Biden, Arlington, VA, 7/16/2009