The Paradoxy of St. Benedict, University of Mary Unveils Sculpture

From the Bismarck Tribune:

Hauer Theater was standing-room-only on Thursday, [September 8th,] or in the case of University of Mary students, sitting-in-the-aisle-room-only, as sculptor Greg Mueller presented a view of the process that brought his bronze sculpture of St. Benedict to a sheltered square of lawn outside the Benedictine Center for Servant Leadership, under the shadow of the massive bell tower that anchors the campus and monastery south of Bismarck.

Mueller, an artist at Bowling Green State University in Ohio, was commissioned to create U-Mary's first piece of outdoor sculpture through a gift from Myron and Marge Atkinson, of Bismarck, who were present at [the] convocation, along with members of the Benedictine religious community, teachers and students.

St. Benedict was lowered into place beforehand by crane, resting on a hexagonal pedestal designed as an ode to the angular Marcel Breuer geometry of the buildings on campus, Mueller said.

Mueller brought video and slides, an inside look at the creation of the 15-foot bronze sculpture, a process akin to working in a steel mill or a foundry - lots of physical labor, muscle, solder, metal and mess as shapes are created, turned inside-out, outside-in, as the sculptor creates several positive and negative images of the piece, building it up in layers and sections with materials such as aluminum, burlap, wax, steel, copper and plaster.

In the end, patina-ed and complete, the piece is given a good rubbing of paste wax and set down in its place, and viewers see a sixth century monastic in rough robes, shaven-headed, barefoot, descending a 12-runged ladder, symbolic of the 12 virtues of the Rule of Benedict.

The theme of the work is "humility," Mueller said, a strong theme in the Rule of Benedict that guides Benedictine monastic life, descending in humbleness, with the byproduct of spiritual ascension.

Traditionally, Benedict is seen holding his Rule in one hand, but in this piece, his free hand is empty, open, "extending the offer to follow the Rule," Mueller said.

Mueller first rubbed shoulders with Benedictines at St. John's University at Collegeville, Minn. Architect Marcel Breuer, who designed the great themes of U-Mary and Annunciation Monastery, is an architectural hero of his, he said.

So, details of St. Benedict's look, such as the bold, simple and angular crozier, or shepherd's staff, incorporated into the piece, pay respect to Breuer's love of massive Egyptian form and use of geometric detail, he said.

If people see this piece and think about humility, "It's done its job in a divided world," Mueller said. 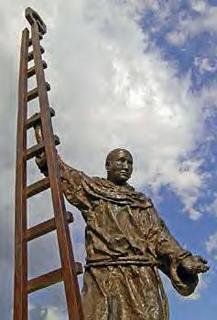 Disclaimers: First, Mr. Mueller is my cousin-in-law, and second, I have only seen the sculpture from the picture on the University of Mary's web site, and photographs never, ever do justice to a sculpture.

I knew that Mr. Mueller had been working on this sculpture for some time, but this is nothing of what I envisioned. His is not the Benedict that is often depicted as old and frail, like the icon that graces this blog. This is a young, powerful man offering that we follow him up the sturdy, hard-edged (OK--bold, if you will) ladder of humility. As often happens, it is a counterintuitive juxtaposition that reveals the Truth, that which preserved Western civilization through the monastic life, in this case. Imitating Jesus Christ's complete submission of His perfect human will to the Father, it is a vigorous Benedict's humility that is our example today for aligning ourselves to the Grace that may undo the dictatorship of relativism.
Posted by Scott W at 2:38 AM