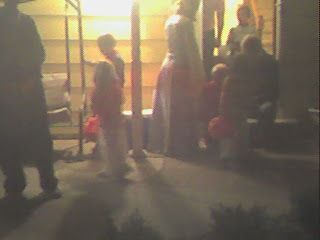 Once again the Troglotykes have safely completed their appointed rounds to collect their culturally sanctioned candy entitlement. Acting the escort is one of the simple pleasures of American fatherhood.

Standing at the curb with a watchful eye as the brood makes its way to the door, gives a hearty "Trick or Treat" in near unison, and then departs with ringing "Thank you"'s and bright smiles; sometimes the smile comes part of the way out, sometimes it makes it all the way to my face in the dark.

Last night in our neighborhood, the ratio of "chaperoning" dads to moms was about 5:2. Since I was a child, and everywhere that I have lived, the task of taking children out "Trick or Treating" has been taken up by the fathers. Passing out the candy? That's women's work. Just one of those things. I am sure there is some psychological case to be made between the sexes: The Great Protector vs. the Nurturing Provider, or some such. Whatever the reason, it is ritual for men to wander in the streets with flashlights, purse their lips and give knowing nods and mumbled greetings to each other, and bond with their children by giving small pointers as to how to improve their candy-gathering efficiency (like wait for your 2-year old brother to get to the door before ringing the bell).

A few years ago, when the Clan lived in Oklahoma, I had a business trip for the following week planned to the Twin Cities, where our parents and siblings lived. My sister was having a milestone birthday bash the Friday before and wanted me to adjust my travel plans so I could fly up early to attend her party. The problem was that it meant I would have to miss Halloween.

Our father had died a couple years earlier. When I had missed Halloween the previous year because I was out of town, the memories that night of all those years my father had taken us out convinced me that I was shirking a duty. I hoped she would understand, but she didn't, or perhaps she couldn't. "I'm Sorry," I told my sister, "I can't miss Halloween again. It's a Dad thing."

And, yes, it's still a Dad thing. Sure, there are married women who have to be the ones to take their children, like the Troglodytrix did when I was out of town. But frankly, when I see a mother out with the children, while the dad stays home, I have to fight the same urge I get when I see a married man who regularly does not wear a wedding ring: Be a man! What are you trying to hide?

Thankfully, that's the exception and not the rule. The dad ratio remains plenty high. If ever there were a Halloween night where this dipped below a super-majority, I would fear for the nation. Until then, there is always hope.