One of the really cool things about the Church is the communion of saints. The communion of saints is the spiritual solidarity which binds together the faithful on earth, the souls in purgatory, and the saints in heaven in the organic unity of the same mystical body under Christ its head. In other words, the extent to which we are united to Christ, and the extent of those who have gone before us are united to Christ, is the level we are still united together. It is more real than just memories of those loved ones who we've lost and must learn to live without, or notions of ghosts and spirits traipsing across the inter-dimensions to meddle in our affairs.

Another cool thing is the Church's calendar, which is primarily geared toward feasts about Christ (as it should be, of course). Throughout the year there are days dedicated to saints, often coinciding with the dates of their deaths (the dates that we would take to coincide with their entrances into heaven), which are, for lack of a better word, ornaments around the feasts of Christ. Days of remembering with stories, days of prayer, days to celebrate their examples (emphasis sometimes put on the celebrating). Similarly, our own memorials, within our families, for family and friends can in turn "decorate" the Church's celebrations of the lives of the saints.

For example, the anniversary of my father's death is in July. On that day, we pray for the repose of his soul and ask for his prayers on our behalf. We tell stories about him, thereby introducing him to the majority of our children who never met him face-to-face. We invariably eat ice cream, one of his favorite treats (actually, he often ate it for breakfast). And it is one of the few times we let manners go and let the kids lick their dishes, like he did; ice cream was such a good thing that none of it was to be wasted.

Not many of us have met someone whose holiness is so undeniable that the Church recognizes him, or her, as someone who has joined Christ in heaven without the intermediate state of purgatory. Yet, they walked the earth as we do; they sang, talked, wrote, quarrelled, as we do. They ate, they drank. St. Thomas Aquinas was what we used to call "a healthy eater." Did Aquinas lick his plate clean? A family memorial may give you some insight on that. And in doing so remind you of his example. 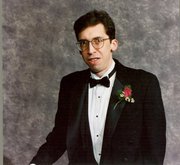 Which brings us to August 7th. It's been a year since my friend, Nate, died. Nate was one of the smartest guys I've ever known, and a gifted musician (piano), among other things. But one of the things that became clear as we met and talked in the days following, was that his real genius, his developed talent, may have been his ability to connect with others; in a way of being fully present with them... so not like having 500 Facebook friends, or 1700 Twitter followers, "connected."

In some respects, it was a rather eclectic group of friends he had. But what was common was the type of friendship and how diligently it was all maintained. Whether you saw him often, or not for months at a time, they were friendships that could be maintained with a few words between poker hands as your shuffling the cards, or a couple hours over pitchers, if that's what was needed. Across the table, or thousands of miles. And then picked back up right where you left off, even if a year went by.

I won't go into the details, because they're personal, but the challenging questions, the sly retorts, the frustrations, the simple laughs, the flashes of insight, they weren't unique in kind, but the bonds were genuine. We are born alone. We die alone. But we live together, and to do that we have to know one another. Modeling that was his gift to us.

So how to celebrate, this being his memorial day and all (in addition to the obvious answer of prayer--Catholics can be predictable this way--Mass, that would have been good, too)? Tonight we had our block party for Night to Unite (our local version of National Night Out). And some of our clan then went to an end-of-the-baseball-season party for one of the boys. Two parties, plenty of opportunities for those "connections" floating around to keep working on. That was probably a pretty good start...

Nate, may the angels take you into paradise: may the martyrs come to welcome you on your way and lead you to the holy city, Jerusalem. May the choir of angels welcome you with Lazarus who once was poor, may you have everlasting rest. RIP, buddy. Amen.
Posted by Scott W at 11:27 PM